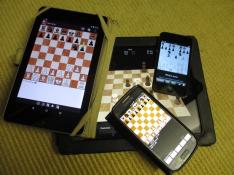 This section is mainly aimed at app developers though users may hopefully find it helpful also. It includes specific comments or feedback which is perhaps too detailed for the individual app review but which might be useful to the active developer. Separating out these comments will also hopefully prevent the app reviews from becoming too long and detailed.

I will add specific comments to this section as app reviews are posted. As I am using many apps on a regular basis I may also add comments as they come to mind about any chess related apps whether or not they have already been reviewed.