At the time of writing (October 2016) Chess Journal is a relatively new iOS app aimed at helping the practical chess player. You can follow progress of the app via the developer’s twitter account

What is Chess Journal and what goals were you hoping to achieve in developing it?
ChessJournal is a passion project aimed at highlighting and promoting over the board chess. It seemed to me a while a go that most chess app’s focus on a number of small 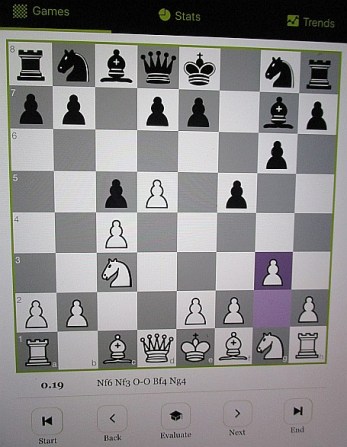 areas, most notably playing blitz against other humans online or tactics training. The problem I feel is that the longer competitive version of chess is totally different to online chess. Players obsess over their rating and get angry with mistakes in 5 minute blitz. Comparing over the board chess and online chess is like comparing test matches to 20/20 cricket. Both are fun but totally different!

Therefore we wanted to create an app that slowed players down and forced them to think about their own games and not just plug in their moves to an engine and lambast themselves that the move they played was 0.003 pawns worse than the engine recommendation! In that scenario no-one is improving.

So in essence the idea for ChessJournal is to act as a digital scorebook where you can store, study and annotate over the board games. It is much like the paper scorebooks you see players carry at tournaments but with obvious digital advantages such as sharing.

How long has Chess Journal been in development and how much time do you spend a week working on it?
It launched in May 2016 on the AppStore but we started designing and developing it in January 2016. Both myself and Matt (the developer) are young fathers so our time is

precious. We estimate we have spent about 400hrs on it this year between us so far. Things are slowing dow at the minute as we pause and reflect on making the next right step for ChessJournal rather than just keep adding features that no-one wants! One of our biggest challenges is keeping ChessJournal focused as a piece of software!

What have you most enjoyed in developing and releasing your app?
Both myself and Matt have loved the actual time spent making ChessJournal but also reacting to players comments and requests. Its been a fascinating journey so far as we feel we have a unique offering in the chess app space to both our advantage and detriment (more on that last comment in the next question).

where does it fit in the market. Players routinely confuse what ChessJournal is because there is very little like it out there. Its strict adherence to studying your own games often means that players write me angry emails that it doesn’t contain a million game database!. Its often compared to much larger, expensive pieces of software that chess players use and as a result some players feedback can range from disappointment to just plain rudeness!

However, I should say that we also receive a lot of lovely positive feedback from players who are really grateful for the little app that we have made! In the next few months we are thinking about how to improve the proposition and positioning of ChessJournal in the chess app market.

What new features and enhancements can users look forward to in future releases of Chess Journal?
One exciting feature we are working on is called “Goals”. This is where a player can record a series of objectives for the competitive season and then anchor games against them over the course of the season. This feature is aimed at filling out the “journal” aspect of ChessJournal and our prototype very much feels like a player is keeping a diary of self improvement. Obviously this feature is very much keeping with our high-level objective of helping chess players focus on their own over the board games.

What is the most common feedback you have received from users?
That it doesn’t do more, ha ha! Chess players always want more features, more space, stronger engines etc. They are very well served by the three big fish in the market of chess.com, Chess24 and the excellent Lichess which I think can make it difficult to carve

out your own niche. From day 1 thats why we have focused on our angle of personal study.

We fully acknowledge that ChessJournal isn’t for everyone! Any player in excess of 2100 probably won’t use ChessJournal and genuinely needs heavy analysis software for the 18th sideline of the Berlin defense. But for anyone rated below 2000 who is serious about improving then ChessJournal absolutely can help them by teaching them where they themselves routinely go wrong (plus by making it easy to share their games and get feedback from stronger players).

Are there any plans for supporting android devices?
Absolutely! We are perfecting on iOS first and to be fair I have pushed back the Android deadline several times but its coming. Android users make up approximately 80% of chess players so when we launch, we want it to be right from day one.

Do you have any other apps in planning or development?
Not at the moment although our lessons from ChessJournal suggest there may be interest in “ChessJournal Pro”…

How can readers follow the development progress of Chess Journal?
We have a blog (thechessjournalblog.wordpress.com) which we update at least monthly and we are also active on Twitter and Facebook. I would just like to finish by saying we really welcome all feedback from the chess community. Together we can make ChessJournal awesome!

Note:  This interview was conducted by email on 1 October 2016