A potentially useful tool for learning about chess openings but rather limited and let down by a small database. Design and layout makes use on a mobile device difficult.

Opening Tree is a free app from Michael Adams who is responsible for a range of chess related apps and software. It is also available for the Ipad and includes an inapp purchase giving the user added features, in this case the ability to edit, score moves and make notes. This review is of the free version (ie without the additional purchase option).

Opening Tree is an analysis tool which enables you to study chess openings in two ways, using either: 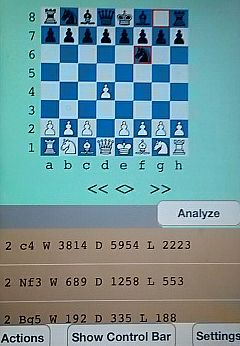 The database of moves with associated frequencies of wins/draws/losses is very helpful and is a commonly used format in established chess database applications. It enables the user to quickly see which are the most frequent moves from a given position and also which produces the best results. As a small improvement, in addition to W/D/L information the % score for each move would also be helpful to more clearly identify the relative success of each move.

The quality of the database of opening moves used is crucial for this to be a useful tool for analysis. In this regard the Opening Tree app is somewhat disappointing. The size of the database used is relatively small, (due to memory constraints on the ipod?). This means that it doesn’t take very many moves, even in the more popular openings before there are either no more or too few results to be meaningful. As an example, if you want to study the Budapest Gambit (1 d4 Nf6 2 c4 e5) you’ll find the database has the results of just 33 games after only the 2nd move. The other drawback is that there is no information included within the app to help assess the quality of the games used to build the database. For example, games where both players are rated above say 2500 elo might be considered a better reference source than where the minimum rating was 2000 elo. 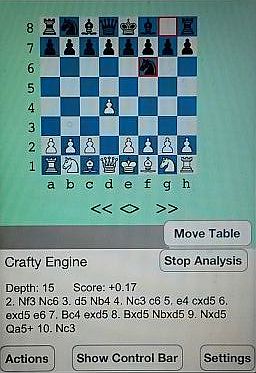 also a good feature. This enables the user to check and assess possible opening lines and counter moves. The chess engine included with the app is Crafty 23.4 – a longstanding and well-respected engine, which happens to be one of my favourites. Whilst Crafty is certainly strong enough for this purpose for the average app user, I can’t help thinking that most knowledgeable users would prefer one or more of the top strength engines that are freely available (for example Stockfish) for analysis purposes. Sadly, Crafty is not one of these.

There are additional analyis features. An in app purchase allows you to assess and record particular moves by using different colours to signify good and bad moves and you are also able to make notes about speciifc moves. The review didn’t test this functionality.

However, it is after a while of using the app that some of the weaknesses with the concept begin to become apparent. Yes, it provides a good way of reviewing and assessing opening lines but it is rather limited in how this can be achieved. The app has a lack of accompanying features that would be helpful for studying purposes. For example, the app doesn’t actually let you play or practice any opening  – the engine is only available as an analysis tool and not a playing partner.

Learning and user edited work on opening lines can’t be exported for use in other apps, nor can the learning be utilised in any other practical way by the app. For example, the app doesn’t allow the user to generate an opening book from their research to use either in the app or another alternative program or app. So there is no direct way to use the app to play against or test your own research and pet lines, you will need to fire up and another chess app.

The user can import their own PGN files of games into the app either via email or ITunes file sharing. However, due to technical constraints (essentially catering for the needs of older devices) only small files of no more than 500 games can be handled. On the Ipod once a PGN file is loaded it is a terribly fiddly and frustrating job to ‘step’ through the moves of a game to be able to compare them to the database. This is down to the size of the controls more of which below. I found myself veering between stepping forward and backwards too often for comfort.

In summary, in considering the combination of features and flexibility I was left with the feeling that a dedicated chess database app might not be a better option.

Practical use and presentation 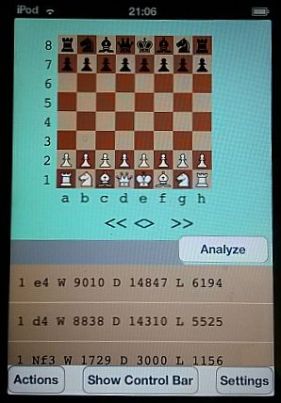 The first thing that’s obvious when using this app on a mobile device is how small the chessboard is. The board takes up just over half of the screen size and means that not only is it potentially difficult to view but that the dreaded ‘fat finger’ problem is likely to come into play. The result is that if you want to enter moves manually (rather than via tapping the particular move from the movelist) the size of the individual squares makes it tricky to tap the correct piece. There feels to be areas of wasted space on either side of the board (maybe the arrow keys could be located here?) and there is no option for resizing the board. Neither is there any potential for screen rotation, and I wonder if landscape format would be better at least on an ipod (this is available on the iPad version).

These issues combine to leave a feeling that the design of the screen layout for the ipod/iphone user at least, could be better. 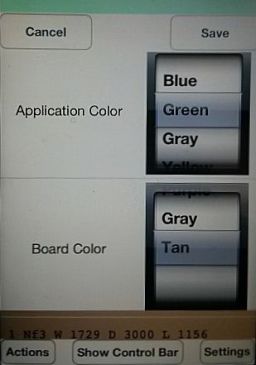 However, although size and layout can’t be altered, there are opportunities for tailoring the presentation. Within the ‘Settings’ option there are a range of easily accessible options for changing various visual aspects. These include a good range of different chessboard colours, background colours and at least two chess piece sets. Refreshingly (unlike some other apps) the choices are between well-designed and respected piece sets which are both very clear and comfortable to use.

The app description on the ITunes store is failry descriptive in terms of the app’s features and operation. This is supplemented by some specific notes of instruction on selecting relevant options; in particular when loading a pgn file for the first time. The developer has also included a change-log on his website together with contact details for support.

To date the app has had only one update since its original release, this being a year since the writing of this review. As such it doesn’t appear to be in active development. However, the author has released and/or updated other chess apps in the intervening period, so it is too early to conclude that the app is dead.

These are my thoughts; if you have used this app what do you think…..?